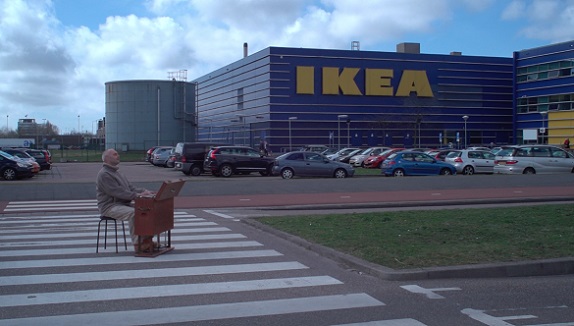 Dan Geesin returns to the intuitive core of his film making with these grotesque, humoristic, poignant, political, tragic and personal works developed from his sketchbook films, to create an intuitive narrative that balances on the edge of experimental, music documentary.

This is a series of short, intuitive films that balance on the edge of experimental, musical documentary. Grotesque, humoristic, poignant, political, tragic and personal works that have been developed from Dan Geesin’s sketchbook films.

ADVERTISING FOR PEOPLE WHO DON’T NEED IT.

‘Google it up’ is often assumed to be the answer to every question in our real world. In this film Dan Geesin takes one of his songs to those working in the virtual world. (11′, 2017, made possible by the Mondriaan Fonds)

I WISH I WASN’T ONE OF THEM.

A musical ode to choices and individualism and a critical look at the furniture giant Ikea. (14′, 2017, made possible by the Mondriaan Fonds)

The Black Sheep motorcycle club, a sculpture, Dan Geesin and a song. (13′, 2017, made possible by the Mondriaan Fonds)

HOME IS WHERE THE HEART IS.

Dan Geesin delivers one of his prized possessions and a song to the Asylum Centre in Ter Apel, The Netherlands. (12′, 2017, made possible by the Mondriaan Fonds)